The garden this year has been amazing.  I have had a great time finding ways to use everything.  Since I I love all things dragon, when I saw a pepper named Dragon Cayenne, I had to buy it.  The plant is a heavy producer and the peppers are lovely.

I decided I would attempt making a Tabasco style sauce using the dragon cayenne and a few of the jalapeños from the garden.

It calls for 1/4 pound of cayenne peppers, then jalapeños and hot cherry peppers (which I do not have) so I improvised.  I ended up using a little over 1/2 pound of cayenne and jalapeño peppers.  I then doubled the rest of the ingredients in the recipe and followed it as written.

I began by washing and removing the stems from my peppers.  I then added them to a medium size sauce pan with lid.  I used about a  1/2 pound+ dragon cayenne and jalapeño peppers, six large cloves peeled garlic – chopped, 2 teaspoons salt, four cups white vinegar.  Bring to a boil, then lower heat,  cover and simmer for 20 minutes.

It was suggested that this be done outside.  The vapors can be very strong and irritating to the eyes and nose.  I did not cook this batch outside, but I did use exhaust fans.  I have cooked peppers before and had the fumes be extremely overwhelming.  You may also want to wear gloves when handling the hot peppers. 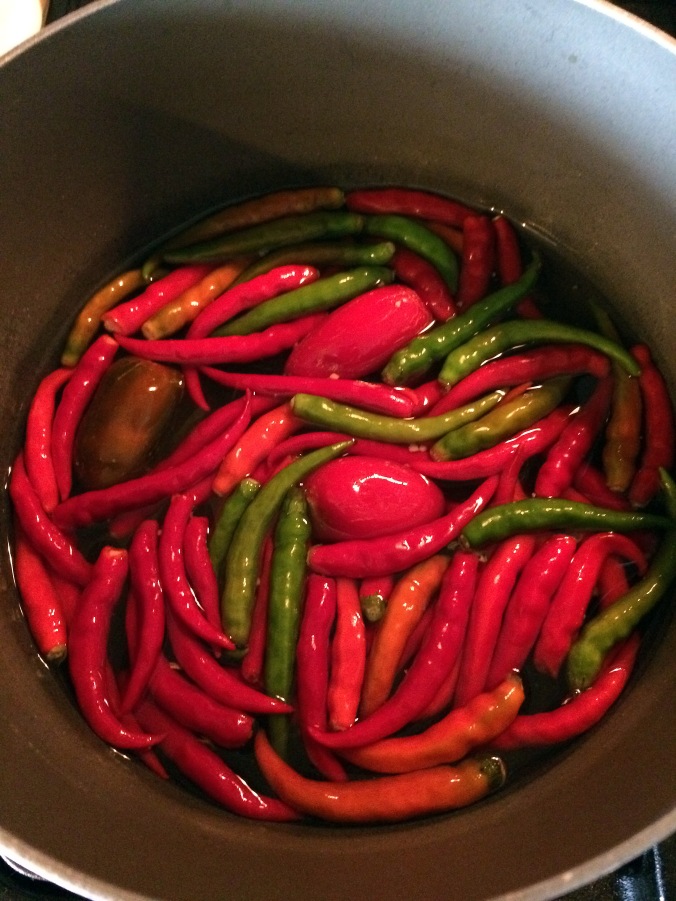 After boiling, I  carefully poured the hot mixture into a blender and pureed.

Then I poured it into a food mill which I had placed over the sauce pan that I had used to cook the mixture in.

I strained out the seeds and other solids and returned the pan of liquid to the stove.

I brought the liquid back to a boil.  Once it began to boil, I turned the fire off and set aside to cool.

I had saved some bottles with shaker tops for making hot sauces and vinegars.  Use whatever method you prefer to clean and sterilize your jars.  I used a funnel to add the cooled sauce to my bottles.  Here is the finished product.  The recipe states it should last six months in the refrigerator.  (Keep refrigerated)

Thanks again to Bernadette at Rants From My Crazy Kitchen for posting this recipe.  I didn’t follow it exactly but it was a great place to start. 🙂