I talk to people who have given up coffee due to acid reflux or heartburn and I feel sad for them, but never thought it would be me.  Lately though, I can empathize.

I found this article on Sweatpants & Coffee today about this issue.  The article discusses some of the things about coffee that can trigger acid reflux and heartburn. It also reviews types of coffee and brewing methods that can help you still enjoy your morning cup of coffee.

Check out this article by guest author R.B Mavericks:

So far 2018 has been busier than I expected.  No camera time.  I happened to be home one day and looked out the kitchen window to see a cardinal.  He was feasting on the dried sunflower head that I had left on a table on our porch.  The photos were taken through my kitchen window.  They are a little blurry and I know I need to clean the windows again. Sigh.

He was so bright and colorful, he made me smile, even when he was giving me his angry face. 🙂

He wasn’t happy being watched and flew to the railing 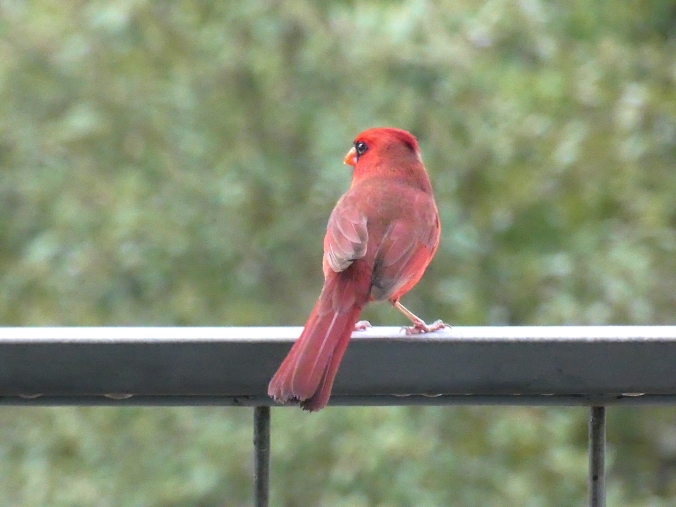 Then he turned around to let me know what he really thought.

I love gardening.  All types of gardening, whether it’s flowers, vegetables, water gardens or cacti and succulents.    My succulent collection has been steadily growing over the last few years.  I keep telling myself to say no to friends offering starts from their succulents, or those “too cool to leave at the garden center” plants I keep bringing home.  So of course, I found an Etsy shop this week called Succulent Treasures.

They sell succulents and cacti and even have gift boxes.

These are wonderful!  Click on the images above or here: Succulent Treasures

I will definitely be dropping some hints about this shop for the holidays. 🙂

I have chickens.  You may have seen post about them before. Here, here, here and here.  😉  The last group of hens we raised are not happy being “cooped” up even with a large run and placement items for them to climb on.  I started looking at flock block recipes after seeing them in the feed store.  I found this one

I had most of the ingredients on hand and it was fairly easy to make.  I added dried meal worms to our recipe, just because.

I used the small pans as suggested in the article.  I also let them cool overnight.  The author mentioned that she had some crumble apart when taken out of the pans warm.

The hens were wary of this as they are with anything new.  We had one brave hen who decided to go first and was well rewarded for her bravery.

What is this thing? 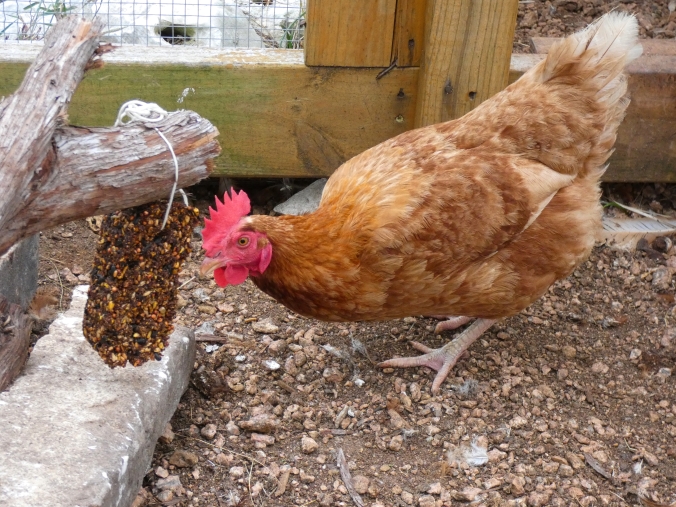 Maybe it will look better from this angle.

Going in for a taste.

Once she tasted it, she went at it with gusto and broke the string that was holding it to the log.  It took the other hens a few moments to catch on that there was a treat.

It proved to be an easy, inexpensive way to give the hens a treat and distract them for a little while.  Definitely a recipe to keep.  Venture over to Mavis Butterfield’s blog for more chicken, gardening and money saving ideas.

I had a bumper crop of hot peppers this year.  I planted several sweet pepper varieties including green, brown and yellow bell peppers and Cubanelles.  The Cubanelles did very well and produced all summer.  The bell pepper not so much.

This photo is from the end of the season.  The dragon cayenne is prolific.  The small orange pepper in the bottom left are the habanero pepper.

Here is one of the Cubanelle plants early in the season.

The Cubanelles are great for making stuffed peppers.  Large, although thin walled, they have a mild flavor.  This is a chorizo stuffed pepper recipe I got from Chili Pepper Madness website.  They were so tasty.  The Cubanelles change color as they ripen, here I used them at the yellow stage.  They also turn a gorgeous red color.

I only planted one jalapeño plant, one habanero plant, one Tabasco pepper plant, and one chili pequin.  It was more than enough.

I made pepper sauce with some of the peppers and froze some of the sweet peppers.  I also decided to dry some peppers.  This has turned out to be the easiest preservation method so far.

I use a dehydrator that was given to me about 25 years ago.  It is American Harvest Snack Master Pro Dehydrator by Nesco.  They do not make the exact model I have anymore.  Mine works just fine and I have extra trays for it too.

I split some of the peppers – the jalapeños and habaneros, and left the others whole. 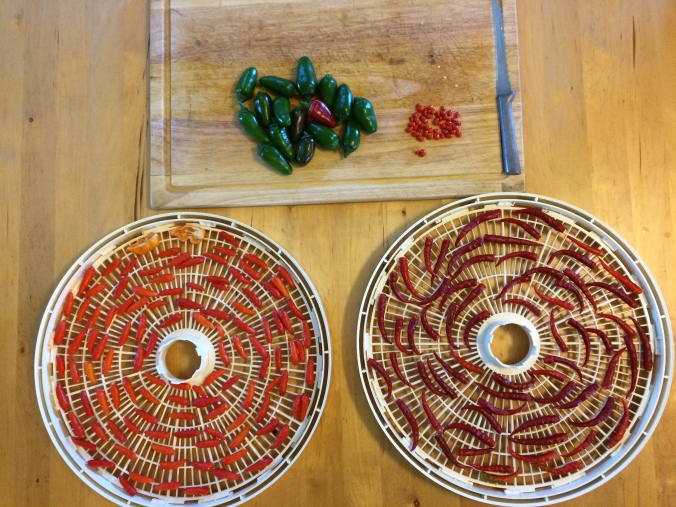 It took about twelve hours to dry the peppers.

I then stored them in glass canning jars. 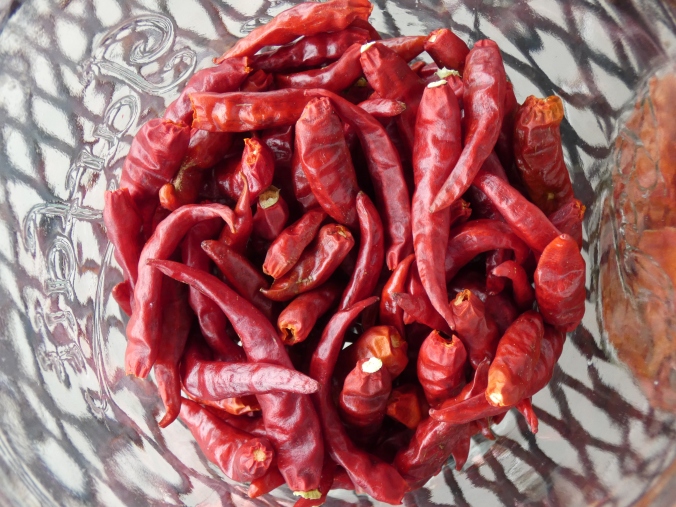 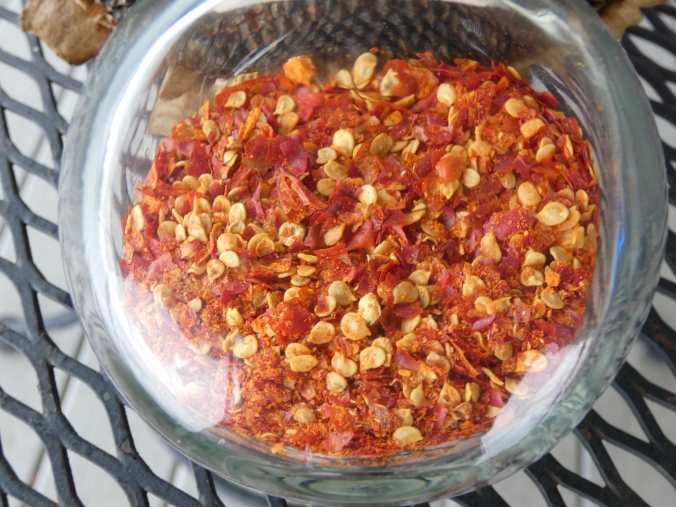 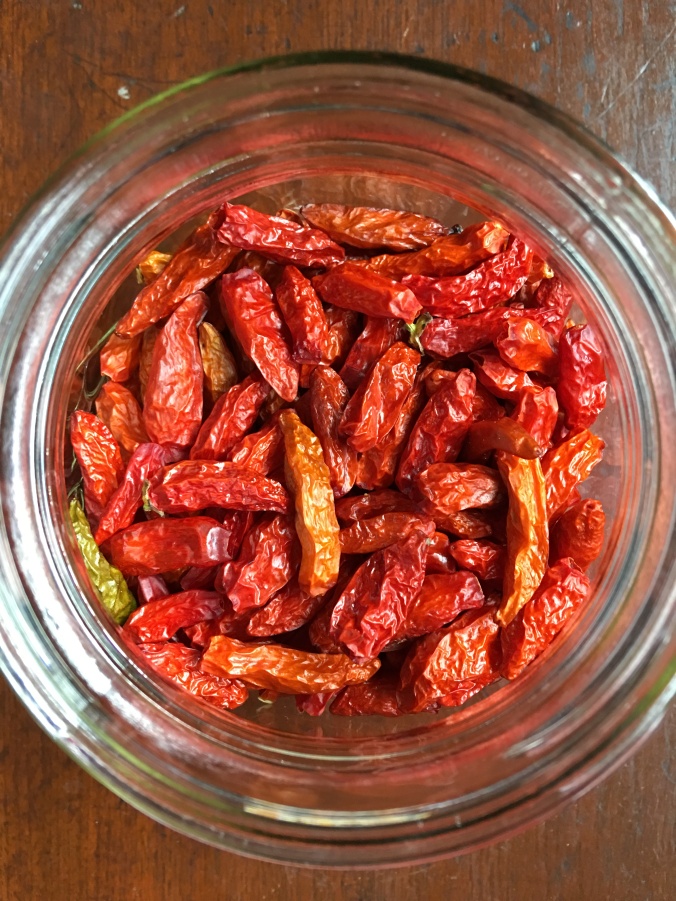 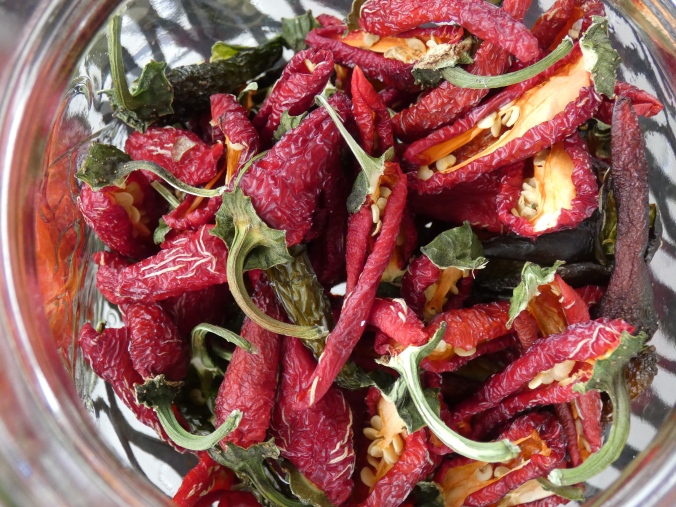 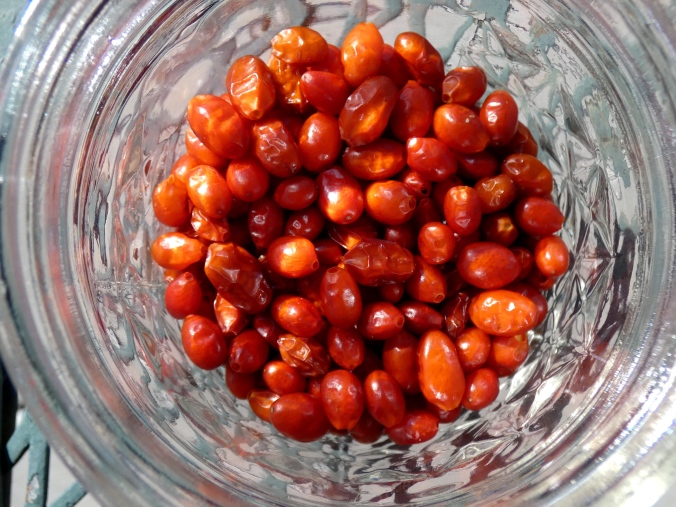 I also dried some herbs.  They dry at a lower temperature and took longer.  The oregano dried nicely, the basil did not.  I ended up freezing the rest of my basil in olive oil or making it  into pesto, which I also froze (minus the cheese).

I am sure there are many variables that determine the success and length of time when drying vegetables and herbs.  It was fun and I am looking forward to discovering uses for all of this dried pepper. 🙂 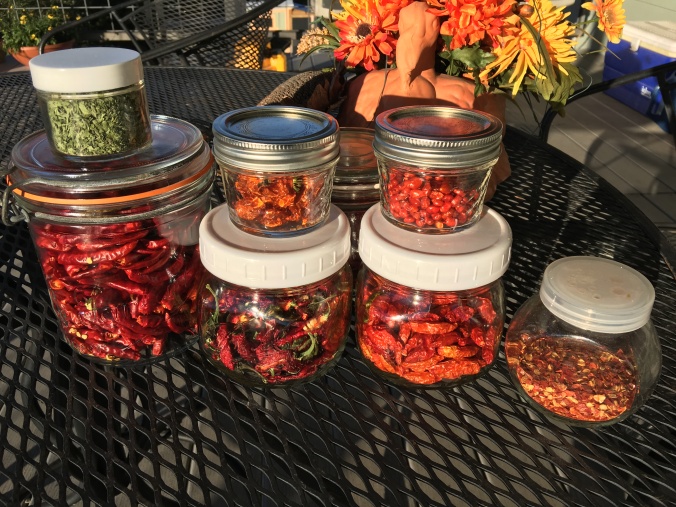 The summer garden is coming to an end.  I have been pulling out dead plants, turning the compost and  taking up the soaker hoses.  There are a few flowers still blooming and the the Gulf Fritillary caterpillars are everywhere.  They are taking care of removing the passion vine that invaded the vegetable garden for me. 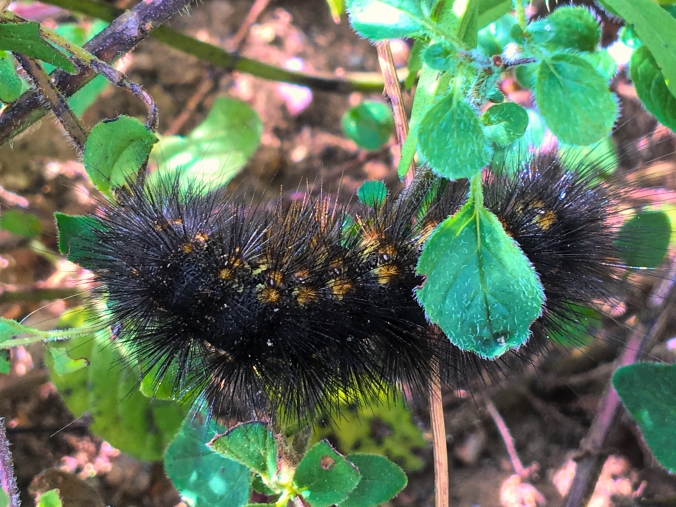 Not sure what this caterpillar will turn into either.  It was on the dead cypress vines. 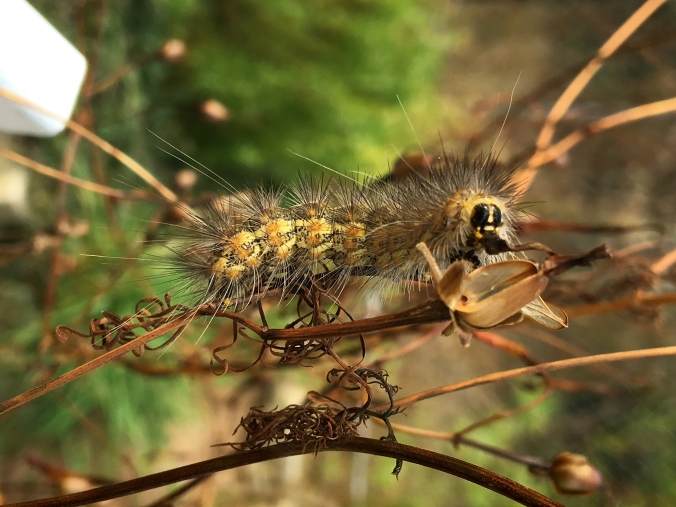 There are many trails and places to hike in the Garden of the Gods park.  We started at the Perkins Central Garden Trail.  From there we drove to the Siamese Twins trail.  (Click on the park info tab to get a map of the trails and formations, and more great information)

I love the texture of the tree roots.  There were many trees with exposed roots along the rocky trails.

This is a panoramic shot from the trail on our way to the Siamese Twins formation.

Coming up to the  Siamese Twin rock formation.

Gorgeous views from the trails. 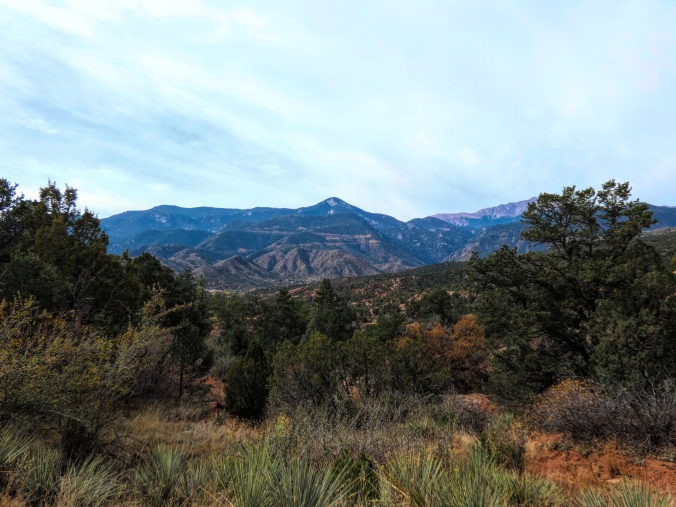 As you can tell, I loved this day trip to the Garden of the Gods.  There was so much more there to explore and I would love to come back.  I hope you have enjoyed visiting the park with me.

My friend Tim teases me, saying that I have to stop and take photos of all the cottony plants.  I guess he’s right.  When we were at the Garden of the Gods I was definitely stopping to take photos of the fluffy, fuzzy, cottony  plants. 😉 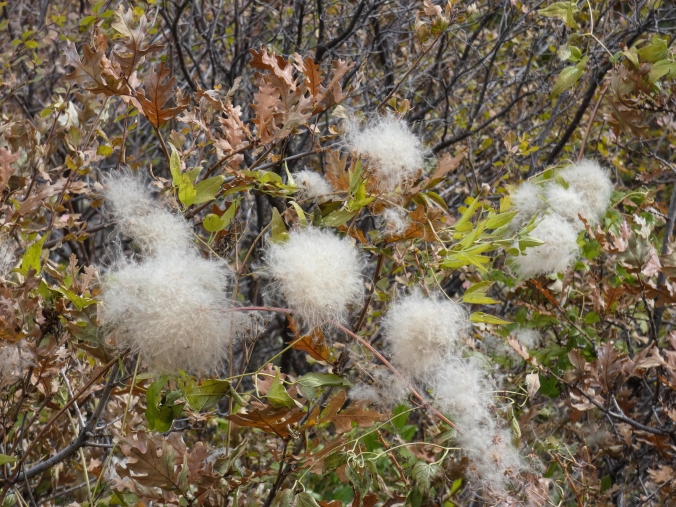 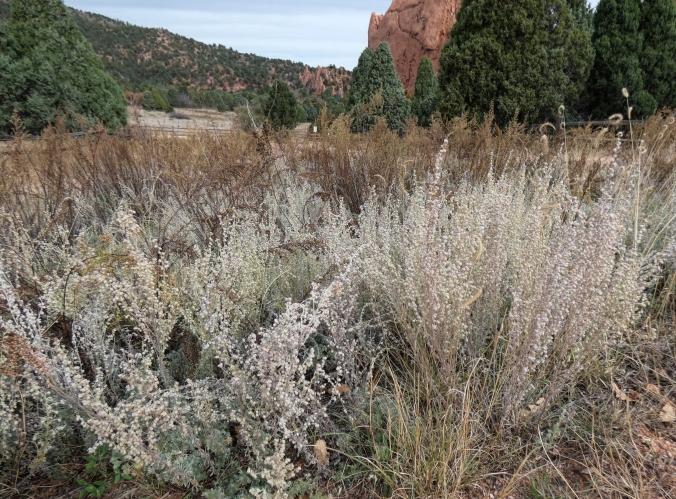 The photo below was edited in Topaz Studio.  The effect is called Degas Dancers 1. 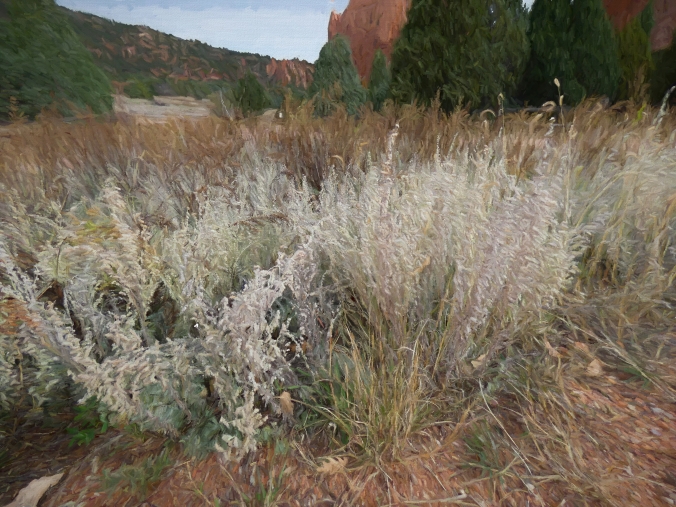 When I think of the Garden of the Gods, I think of the huge beautiful red rocks with names like Cathedral Spires, or Sleeping Giant.  Of course, there is so much more to see there and one of those is another rock formation they simply refer to as White Rock. 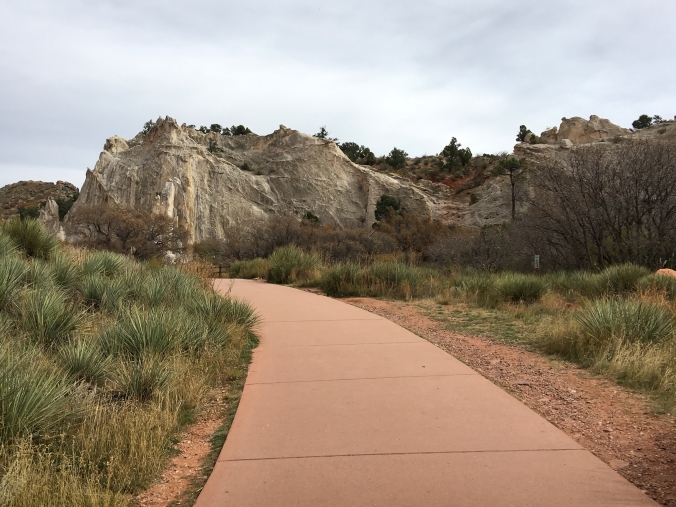 See the rock formation on the top to the left?

We decided it looked like a buffalo.  What do you think?

This was a fun day trip and there are more photos to go through and hopefully share.  If you are in Colorado Springs and I would highly recommend visiting Garden of the Gods.

Trick or Treating has come to an end at our house.  It is now parties or getting together with friends.  There will still be candy and cupcakes, decorations and some reminiscing – at least on my part.

We used to carve pumpkins, but this year slipped past without so much as buying one.  The pumpkin patch did yield a few good ones for baking. Those have been cooked and put in the freezer for later use.

Here are a few jack -o-lanterns from our past celebrations. 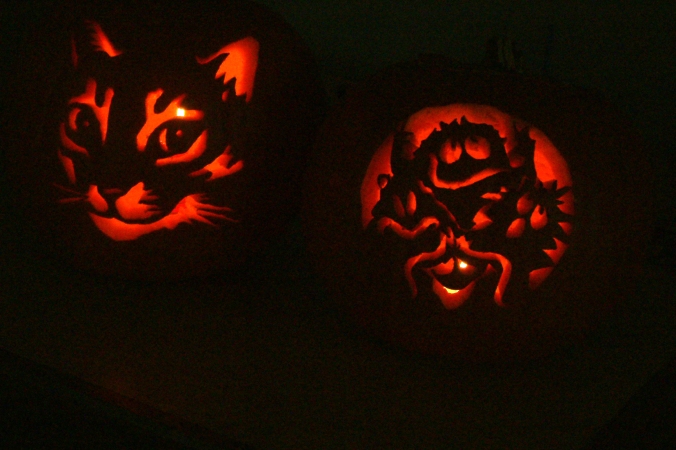 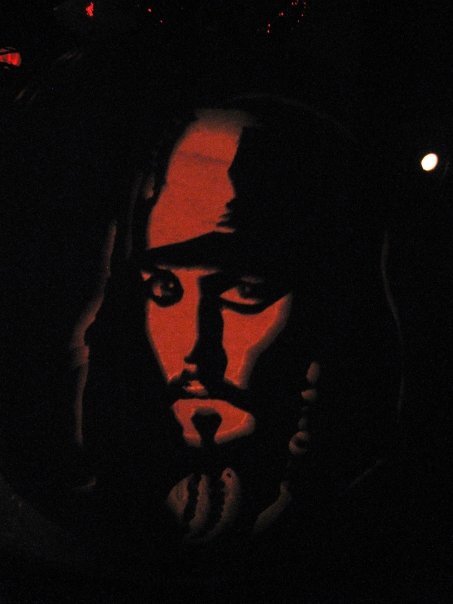