When I am eating low carb, one of the foods I tend to say goodbye to is pizza.  I tried making a pizza with a cauliflower crust, but it didn’t taste like I wanted it to and the texture was wrong.  Then one day on Pinterest I found a recipe for low-carb Everything Bagel Dogs at The Primitive Palate and they mentioned that the crust was basically like Fat Head Pizza dough. Huh?  So back to Pinterest I went.

This was what I was looking for.  The crust is very easy to make.  The directions say to mix gently but I found that it took a bit more mixing to get the melted cheese mixed in evenly with the other ingredients.  I did knead it by hand lightly (wet hands very slightly with water to keep it from sticking.)  Once mixed, transfer to parchment paper, top with another sheet and roll into your desired shape.  Peel off top sheet and it is ready to bake. I baked mine on a perforated pizza pan. 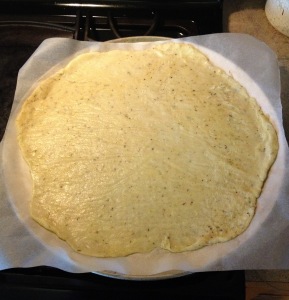 My dough made a very thin 12 inch pizza crust.   The recipe says to bake it 12-15 minutes.  Mine needed a little longer.  The recipe has a tip for making it crispier by flipping it after the top is golden brown.  Check it to make sure it doesn’t burn though. I did this and the crust was nice and crispy.  Unfortunately, I did not take photos of it after it came out of the oven.

Nutrition Information from Ditch the Carbs website for the crust only (They indicate it serves six)  Serving size: 1 slice (base only) Calories: 203 Fat: 16.8g Carbohydrates: 4g Sugar: 1g Fibre: 1.6g Protein: 11g  (for full recipe and instructions click link in red above)

I chose veggies I has on hand for the toppings.

While the crust was baking I cooked the vegetables I planned on using for toppings.  The original recipe states any meat needs to be pre-cooked because once you have the toppings and cheese, it only needs five minutes in the oven to melt the cheese and warm the toppings. 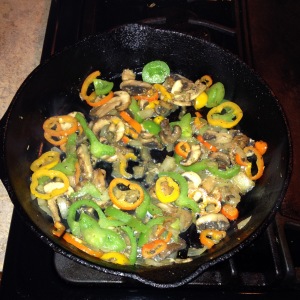 I will caramelize the onions next time and maybe only slightly sautee the peppers.  The vegetable need to be fairly dry since it is a thin crust and the cooking time is limited.

After the crust had baked, I used 1/2 cup lower carb pasta sauce on the crust, then applied the cooked vegetable, then some pepperoni slices, sliced pickled jalapenos and black olives.

Added some shredded Italian blend cheese and it is ready to bake.

I baked my pizza for longer than the recipes five minutes.  I kept checking the pizza every few minutes until the toppings were melted.

It was hard waiting for it to cool enough to slice. 🙂

It was amazingly good and is definitely a recipe I will make again. 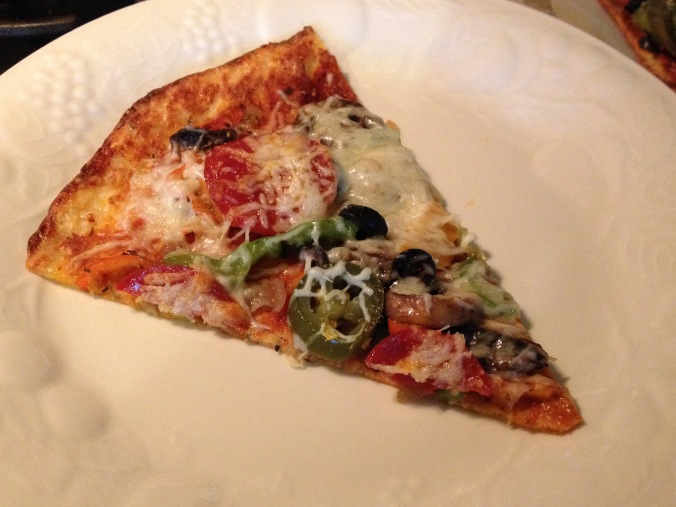 Enjoy and let me know if you try it.